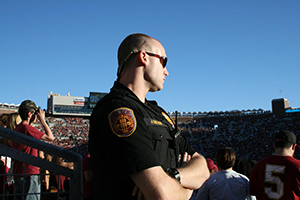 The Uniform Patrol Division is the largest division of the Florida State University Police Department. It is comprised of Patrol Officers, Communication Officers, Bicycle Officers, and Motorcycle Officers.

Florida State University Police officers are sworn officers with full powers of arrest provided to them by Florida State Statutes. Police officers in the Uniform Patrol Division are available 24 hours a day, seven days a week throughout the year providing essential police services.

Police Officers assigned to the Uniform Patrol Section are the backbone of the department. They are the first responders to a call for police service. Our officers currently serve on a daily bases a population of over 40,000, consisting of students, faculty, staff and visitors to the Florida State University Campus. That population can easily triple on any given home football game weekend. These officers are committed to preventing and reducing crime, protecting and educating our community and providing assistance to those in need. 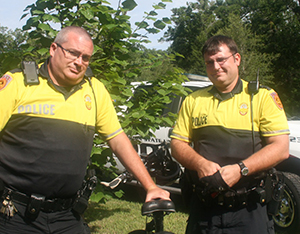 Bias-based profiling or racial profiling in traffic contacts, field contacts, and in asset seizure and forfeiture efforts is strictly prohibited. Sworn officers shall actively enforce state and federal laws and applicable University policies and procedures in a responsible and professional manner, without regard to race, ethnicity, national origin, sexual orientation, or gender. 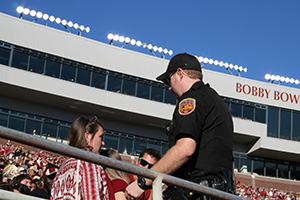 Officers may take into account the reported race or ethnicity of a specific suspect or suspects based upon trustworthy, locally relevant information that links a person or persons of a specific race/ethnicity to a particular unlawful incident. Race and/or ethnicity can never be used as the sole basis for probable cause or reasonable suspicion.

Should you encounter a situation where you believe you were stopped by an officer based on your race, color, ethnicity, sex, sexual orientation, physical handicap, religion or other belief system, you are encouraged to contact the on duty shift supervisor as soon as possible, by contacting the Florida State University Police Department at (850) 644-1234 and ask to speak to the on duty shift supervisor.